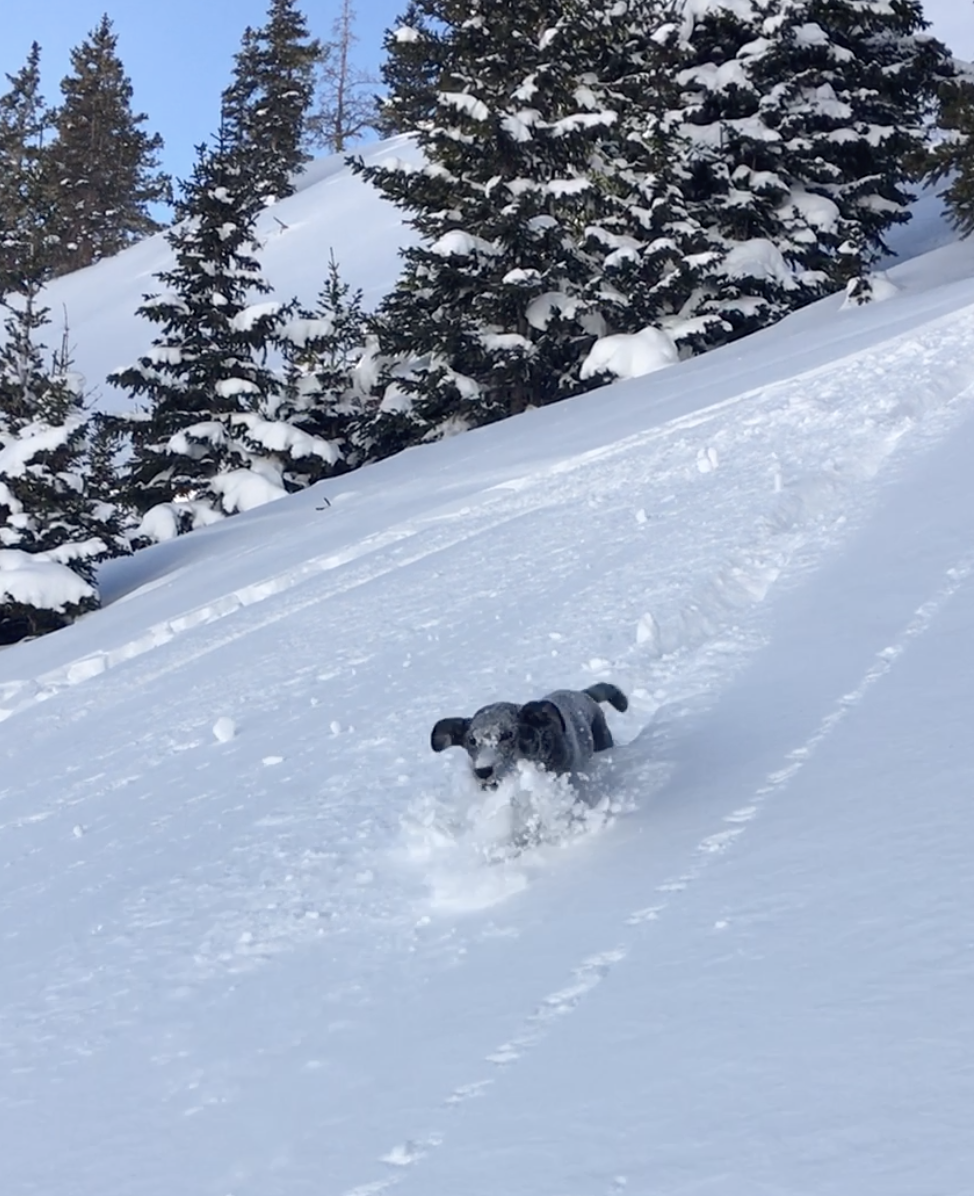 The weekend of January 28th was one for the books! With several storms dumping fresh snow in the mountains, The Breckenridge International Snow Sculpture competition, The Dillon Ice Castles and the X Games in Aspen, the roads and mountains were crowded. Of these three events I will be honest and say that the Ice Castles was probably the furthest down on my list of things to attend this Winter, thinking it was for kids. However, with family in town and fortified with some whiskey to brave the subzero temperatures we got tickets, and everyone had a blast.  I am pretty sure I giggled like a child when going down the ice cave slide, and the fire show was cool as well. I can see why it is such a big draw, these people make these castles internationally and they are impressive.

Sorry for the tangent. Instead of battling the crowds over this particular weekend we decided to stay in and get some work done. This paid off when a friend called on Monday and told me he had the afternoon off. This was all the excuse I needed to the break out the beacon, shovel, and probe and get Paddie into the backcountry for the first time.

Paddie has been out skinning a few times this winter, mostly on flat trails and small hills by our house. Lynne took her to Arapahoe Basin one morning to skin to the top and she loved it. I was excited to see how she would fare off-trail. Most of the resorts in Summit County offer uphill access.  A-Basin is the only one I know of that allows dogs, but only outside of regular skiing hours. 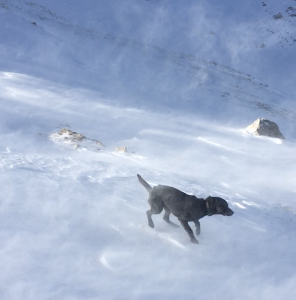 The skin up wasn’t too bad, Paddie did her usual thing of running all over as we slowly trudged up single file. It was a little windy on top of the knoll, but Paddie was a trooper. I am not sure if she had picked up on Lynne’s trick as using me as a wind break, but one big gust sent her running between my legs. Additional terrain beckoned us to continue higher, but those lines were steeper, and it was the aspect that CAIC said was prone to slide. After the new snow and heavy winds, it did not seem smart to continue up and we decided it was probably a good idea to start skiing back down. As a reminder, dogs can cause avalanches just the same as people and should be a part of your decision making process when taking them with you.

I want to take this opportunity to mention that having the proper gear and knowledge is important when exploring the backcountry. The Colorado Avalanche Information Center (CAIC) is a great organization and resource everyone should be familiar with if wanting to play in the backcountry.

“The CAIC is a program within the Colorado Department of Natural Resources, a state government agency. They have 20 staff that work out of 8 offices that cover the mountainous areas of Colorado. The CAIC is the public side of the partnership. The mission of the CAIC is to provide avalanche information, education and promote research for the protection of life, property and the enhancement of the state’s economy. These are the folks that produce the weather and backcountry avalanche forecasts. They teach avalanche classes to school kids, university students, and avalanche workers. The CAIC also works with CDOT to reduce the threat of avalanches to the State Transportation System.” 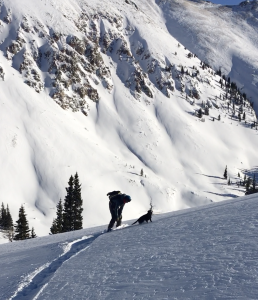 Everyone started to get a little chilly as we switched our gear over. Being in the shade on the skin up was
nice, but now that we had stopped moving it was getting cold fast. Once we put on a few extra layers and took the picture of Paddie, like I promised I would, we started to ski around the ridge towards the sun.

Finally Back in The Car

Tiring out a 9-month-old black lab is almost impossible. Whenever we go 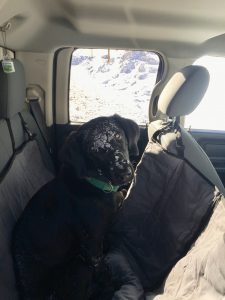 for a hike she probably runs five times as far as we do as she zigzags back and forth, and after we get back she is at the door ten minutes later ready to go again whenever we move. But I think swimming through the snow and trying to keep up on the downhill did the trick. After I had her back in the truck she gave me a look like she was ready to go home. The most amazing part is that three hours after leaving the house we were turning back into the driveway.

Going on epic trips where people rarely venture is always fun, but being able to get a quick skin in and a few powder turns on a last minutes notice is the reason I live in Summit County. The short duration of the trip was also a key factor as my friend who was “free” for the afternoon actually has a 10- month old little girl that Lynne, my wife, offered to watch so we could go have fun.