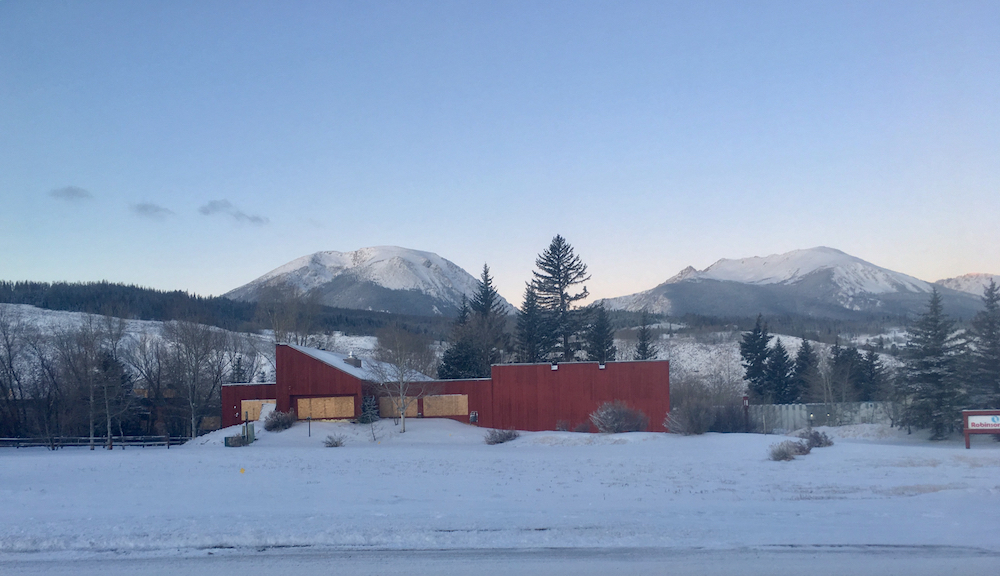 We have been filled with mixed emotions. Winter came early and fast to Summit County allowing many of the ski resorts to open earlier than planned. However, this early winter has also meant that our deconstruction has had to adapt to lots of snow and some subzero temperatures. I am going to use this post to describe our original plan for the different materials and how we adapted to the changing weather to make sure we divert as much as possible. 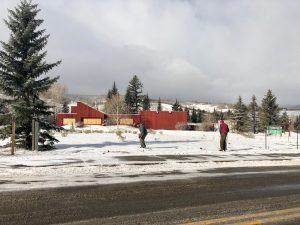 The first step of deconstruction is securing the site, hammering t-posts into semi-frozen earth is a good example of working harder, not smarter, it was 60 and sunny two days before this picture was taken. The early cold and snow might make things a little more difficult, but it will not deter us from our goal of diverting material.

A typical wood framed building can be divided into a few major components, below in bold are general categories and our original diversion plan. I have also included what adjustments we made due to the changing weather.

You will notice I use the term donate or donation pile throughout this post. There are companies similar to thrift stores that focus on used building materials. Habitat for Humanity has their ReUse stores located throughout the country, there are also a lot of local companies, the Denver area has 5 that I know of. These places will take different materials in different conditions, and some even offer free pickup services if you have enough material to make it worth their while. My next post will be focusing on these types of stores and how you can utilize their services to help you divert material.

We had originally intended to separate and denail the framing lumber, then donate it.  But the early snow storms have forced us to change our plan. The cold wet temperatures make processing the lumber according to our original plan unfeasible. As you need lots of space to separate

then store the lumber. Many places have strict rules for donating lumber. In general, the lumber must be 4 feet or longer, denailed, and generally in a reusable condition.

When I realized we were not going to be able to process the lumber I searched around the front range and found A-1 organics. They have a program where they take framing lumber and chip it up into mulch. They can either use the mulch as is or compost it. We separated the framing lumber from contaminants like drywall/adhesive/paint/stain tar paper or anything else that is not wood or metal. The big advantage to this route is that the lumber can have the nails and other metal attached. One surprise when we were deconstructing the building was how much adhesive was used to adhere the drywall to the studs, unfortunately, this adhesive contaminated wood will have to go to the landfill.

The roof had two components, a pitched metal section as well as a flat section sealed with an EPDM rubber membrane. We originally planned to donate or sell the metal panels. Our plans changed after unscrewing all the panels and we found copious amounts glue adhering them to the roof sheathing. This caused the panels to deform while we were trying to pry them up, so instead of donating them, we were forced to put them in the metal recycling pile.

We removed the EPDM and rolled it up in sections allowing this to be diverted. There are many uses for this material from heavy tarps to pond liners.

This building used a now hard to find and expensive old growth redwood as its siding, we removed this by hand and have stacked it on racks to keep it off the ground.

Unless a building is fairly new you almost always have to send fiberglass insulation to the landfill. Since the building had sat vacant for so long there had been water leaks and animal infestation, contaminating the insulation. However, there were foam panels behind the siding. We removed these as carefully as possible, but like the roof, the contractor had glued these as well as nailing. This made removing reusable sized pieces difficult, but whenever we were able to remove a ½ sheet or larger we put in into the donation pile

I have never found a way to recycle used drywall, this all had to go to the landfill

A buildings mechanics can vary a lot and you never know what might be hiding in the walls until you expose it. Once we got the drywall off, we were lucky, and everything was fairly simple. We cut out and separated everything we could by hand, with most of it going into the recycling. We were able to remove some longer pieces of the conduit in a reusable condition that will be donated

We found several sections of tongue and groove wanes coating, I am still trying to identify the species of wood but it is some sort of exotic hardwood. The more organized you can keep the material as you deconstruct the better condition it will remain in. We removed the paneling by hand and denailed it immediately, this prevents the stacked lumber from getting scratched. Even though we will refinish the wood, deep scrapes can be hard to cover up without removing a lot of wood from the surface.

There was no reusable flooring. The small amount of carpet was old and dirty, and with the industrial purpose of the building, most of the floor was just the concrete slab.

Windows can be hard to divert, they either have to be old single pane ones that artists or interior decorators might want to use, or they have to be fairly new. Both in glazing and sealing window technology is advancing fast. Many places that except windows require them to be 10 years old or newer, otherwise there is little to no market for used windows.

There was one exception in our building to the windows, there were 15 panels of 3×5 double-paned glass. These were given to a person who wanted to build a greenhouse out of them. Since they were older, they did not have any glazing and make ideal greenhouse coverings.

Many of the interior doors were hollow core and have little use, but the solid steel commercial doors can be donated.

This category includes items such as cabinets, lighting fixtures, bathroom hardware, built-in furniture, doors, and items that can be easily removed from a building fairly eas

Many times the building owner can get big tax deductions from donating these materials. This being a commercial building there was very little of this material.

There was one bathroom that looked it was remodeled and we removed the lighting fixtures as well as the new plumbing fixtures.

The concrete will be sent to a local aggregate company, where they grind it up and use it as aggregate and fill in new material or new projects. The aggregate company does have different requirements than the landfill. The concrete has to be smaller than 2’x2’x2’ chunks and there cannot be any rebar sticking out of it. Getting the concrete to meet these standards requires more processing, which in turn adds cost, however it is 75% less per ton than going to the landfill. Concrete is a heavy material and saving 75% of the dumping costs will more than pay for the extra machine time.

The Snow has continued over the past two weeks with the mountains reporting another 5” this morning, but we are close to finishing our deconstruction. While we are not able to have as much material reused as originally planned, we are happy that we are still finding avenues to divert the material through recycling programs. The next post will go into greater detail about how and why you might donate material, and ways you can use that to offset the cost of additional labor required to remove them in good condition.